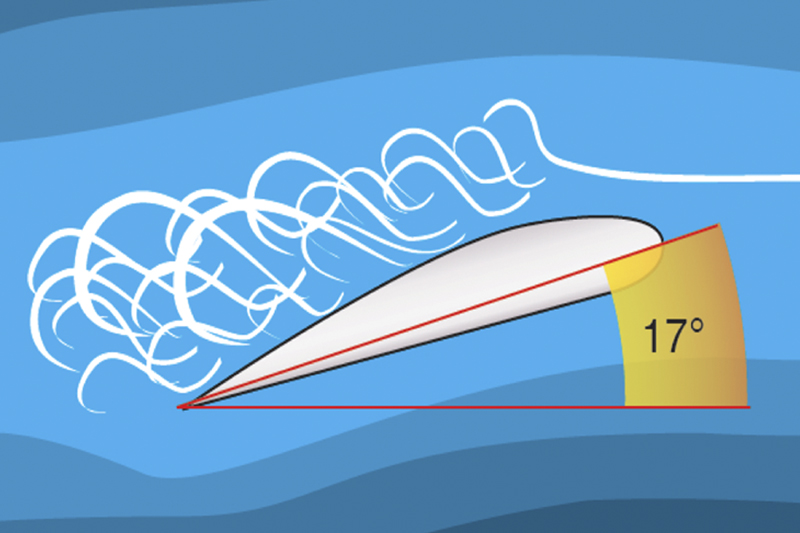 Stalls. It is the topic that confounds more students than any other. It has nothing to do with the engine. It has nothing to do with airspeed. There is one and only one defining element of what a stall is. A stall occurs when a wing exceeds the critical angle of attack. Great. Now, what does that mean? We are going to breakdown stalls, lift, and everything in between.

First, let’s talk about what is meant by “wing.” Yes, those big rectangular things jutting out from a fuselage are wings of course, but when talking about stalls, we are looking specifically at the chord line of the wing. If you draw a side profile of a wing and extend a line from the leading edge to the trailing edge, you’ve just drawn the chord line. Why bother with a chord line, why not just say “the wing”? Watch what happens to the chord line of the wing as you add flaps, or aileron inputs. The chord line changes as you manipulate control surfaces!

Next, let’s look at angle of attack (AOA.) The book definition tells us that the AOA is the angle at which the relative wind meets the chord line of the wing. We just discussed what the chord line of the wing is, but what about relative wind? This is the airflow that is opposite and parallel to the flight path. It has both a direction, and a velocity, the latter of which we know as our airspeed. Remember, flight path and pitch attitude are two different things. When we practice slow flight we are taught to pitch the nose up quite a bit to maintain altitude. Our pitch attitude is nose high but our flight path remains lateral since we are maintaining altitude rather than climbing. We can actually visualize our AOA in this scenario.

These three ingredients; a wing, relative wind, and an angle of attack are the main things we need for lift. Just like any recipe, the balance between those ingredients will give you a different outcome. The more airspeed you have, the less AOA you need to generate enough lift to maintain level flight. With less airspeed, you need more of an AOA to generate the same amount of lift needed to maintain level flight.

Just like with a recipe, if you add too much of one ingredient you can mess up the whole pie. In our case, angle of attack is the thing we do not want to have too much of. If we have too large of an AOA, we can stall the airplane. A stall occurs when a wing exceeds the critical angle of attack. The critical angle of attack is the AOA at which the wing generates the most lift it possibly can. It cannot generate any more lift. Any attempt to increase the angle of attack past this point results in a reduction of lift and a large increase in drag. That is exactly what happens during a stall: lift is greatly reduced and drag goes through the roof. Notice that lift doesn’t completely go away, it just gets reduced! The airplane is still flying and is still controllable, it just gets inefficient at this point. Past the critical AOA, airflow is no longer flowing smoothly over the wing. Instead of a smooth flow of air, the air tumbles and swirls above and behind the wing, causing a huge amount of drag.

Notice we didn’t say anything about airspeed in that last paragraph? That is because airspeed and especially a lack of air speed does not cause the airplane to stall. Exceeding the critical angle of attack is the only thing that causes a wing to stall. “But, don’t we practice stalls by slowing the airplane down?” Yes we certainly do! Refer back to our ingredients: wing, airspeed, and AOA. Lower airspeed requires a higher AOA to maintain level flight. So if we slow down enough, we have to keep on increasing and increasing our AOA to maintain level flight. Eventually that AOA is going to get large enough that we pass our critical angle of attack and stall the airplane. It is not the lack of airspeed that caused the stall. It was exceeding the critical angle of attack.

You can stall a wing at any airspeed. You can also fly an airplane well below the published stall speed without stalling. It all comes down to AOA. Any time you present the wing to the relative wind at an angle larger than the critical AOA, you will stall.

To review: the relative wind is the air flow that is opposite and parallel to your flight path. This is not the same as pitch attitude. You can fly along in a straight line, maintaining your altitude but have the nose of the airplane well above the horizon.

The only thing that causes a stall is exceeding the critical angle of attack. The airplane still produces lift, but it gets really inefficient. The airplane does not fall out of the sky. You are still flying.

The only way to correct a stall is then to reduce the angle of attack.