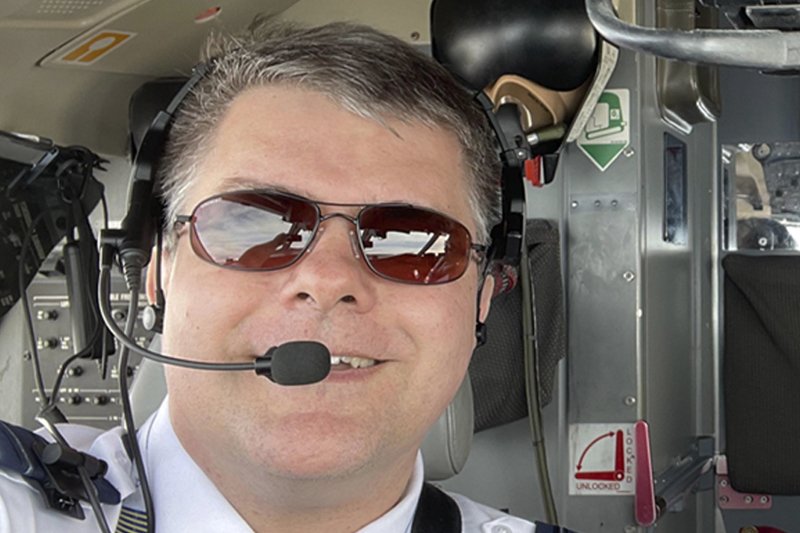 Dan Everette was driving down Airport Road in Warwick, RI a number of years ago literally trying to find something to do. He had just been stationed in Rhode Island for graduate school as part of his service in the United States Coast Guard. He recognized that transferring to a desk after years of active service was going to leave him hungry for something a bit more demanding. It was then that he saw a large sign on the side of a hangar. It read “LEARN TO FLY HERE” and Dan, with no previous thought about learning how to fly, pulled into our parking lot and went for his first flight lesson that same day. Today, having retired from the USCG, Dan is a professional airline pilot.

Flying for a career could not have been further from Dan’s mind when he first walked into our office. He had many years left to go with the Coast Guard and as an electrical engineer specializing in systems he would probably have any number of options available to him should he want a second career. Flying was a hobby, pure and simple.

When he completed his Private Pilot training, he immediately turned his attention to the instrument rating. It was the “hood time” and the IFR system that intrigued him more than any other aspect of flying. “Even if it was 10 miles and clear, I was filing an instrument flight plan.” Even so, flying was a fun pursuit. A nice distraction from his graduate studies.

That all changed in 2006 when he made the journey to EAA Airventure in Oshkosh, WI for the first time. This trip transformed his flying hobby into a full blown passion. It was more than just the sights and sounds of the world’s largest aviation celebration. It was the community he had found. He had flown himself half way across the country with other friends and spent the week completely immersed in the world of flying. Evenings were spent talking about the cool airplanes they had seen, the new widget they saw for sale, or what was coming up the next day. It was the best of aviation and he knew then and there that he had found his place.

In the ensuing years Dan started collecting ratings. His commercial, then his multi, then his CFII (yes as his initial flight instructor certificate), CFI, MEI, and eventually his seaplane rating. “My goal was always to be as safe as possible and one way to do that is to be constantly learning and growing, so as soon as I had one certificate completed I would start looking for a new challenge.” He maintained a blistering pace of knocking out ratings right up until a new assignment with the USCG prevented him from flying for three full years. He made a promise to himself that he would get back into it…eventually.

That “eventually” edged him closer and closer to when retirement from the USCG was a real possibility. Extending his time in the USCG would maybe lead to larger boats and larger commands. Leaving the USCG would probably mean leveraging his engineering credentials into a nice second career.

But then a superior officer, who had beaten Dan to retirement by a few years, popped back into Dan’s life not as a Coast Guard officer, but an airline pilot. That is when Dan finally decided that his second career was going to be the one he knew he wanted. “Why would I do anything other than the thing that I love to do? My worst day in the cockpit is still better than my best day at a desk.”

Upon retiring from the USCG, Dan jumped into professional flying. He taught as an instructor, then flew a season as a survey pilot. This gave him the hours he needed to join an airline but the pandemic struck and the brakes were put on his ascension to the airlines. He returned to teaching for a while before finally being hired at Horizon Air, a regional airline in the Pacific Northwest.

Reflecting on how life changing it was when he pulled into the Horizon Aviation parking lot in the early 2000’s, Dan credits much of his airline career to the community and standards he encountered in those early days. “It wasn’t a pilot factory, it was a group of pilots that were only interested in doing it right and not cutting corners. I had instructors that knew how to push me out of my comfort zone and challenge me, and all of those lessons stuck with me.”