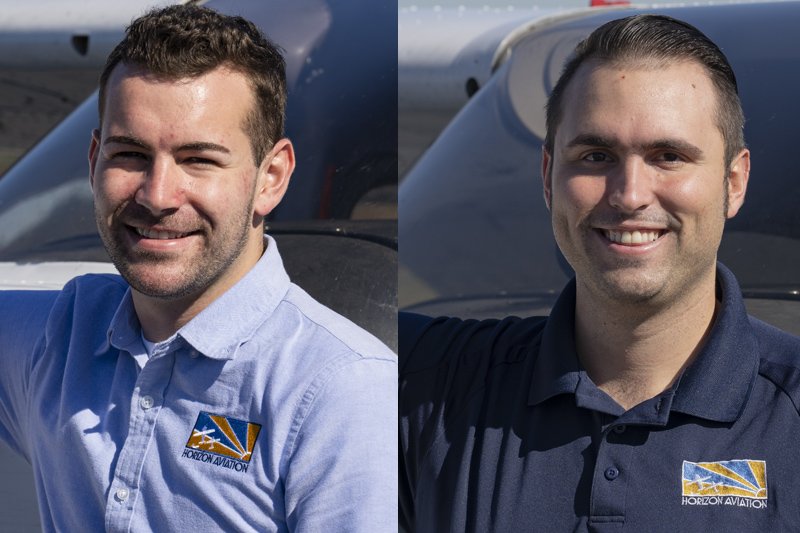 Some of us find aviation through circuitous routes that are hard to put a finger on. Maybe it was going to an air show or seeing a certain movie? Something lit the spark that still burns inside all of us that are afflicted with aviation.

Then there’s our new instructors Josh and Conner. They don’t have to think too hard about how they discovered aviation. They were both raised with it as a normal part of their lives with parents that were professional aviators. Now, they have both found their way to Horizon to begin on their own respective journeys as professional pilots, just like their parents once did.

Josh hails from Colorado and was taught how to fly by his own father, a CFI and corporate pilot. He had a flourishing career in management with a movie theater operator in the southwest. It was fun, challenging and had great potential. Flying, at least at this point wasn’t quite on his radar. When things with the cinema began to lose its luster, Josh began flying with his father.

Once his Private Pilot certificate was in his possession, he decided to go all-in. He says that in that moment he knew that it was what he was meant to do. Josh is thrilled to share everything he has learned with the next generation of aviators.

Conner grew up in a flying family. His father is an airline captain and his mother is a flight attendant. He soloed on his 16th birthday in the family’s classic Cessna 182, complete with a square tail and fastback. He knew early on that he wanted to follow in his father’s footsteps, with an ambition to eventually fly for the same airline his father still flies with. With a degree in hand from Texas A&M, he sets his sights on his career in aviation. Though a long way from home, Conner is thrilled to be on his way and helping aspiring pilots achieve their goals.

Both Josh and Conner are based at our Norwood, MA facility and are already flying with students. Please contact our OWD desk at 781-762-7600 to inquire about their availability.