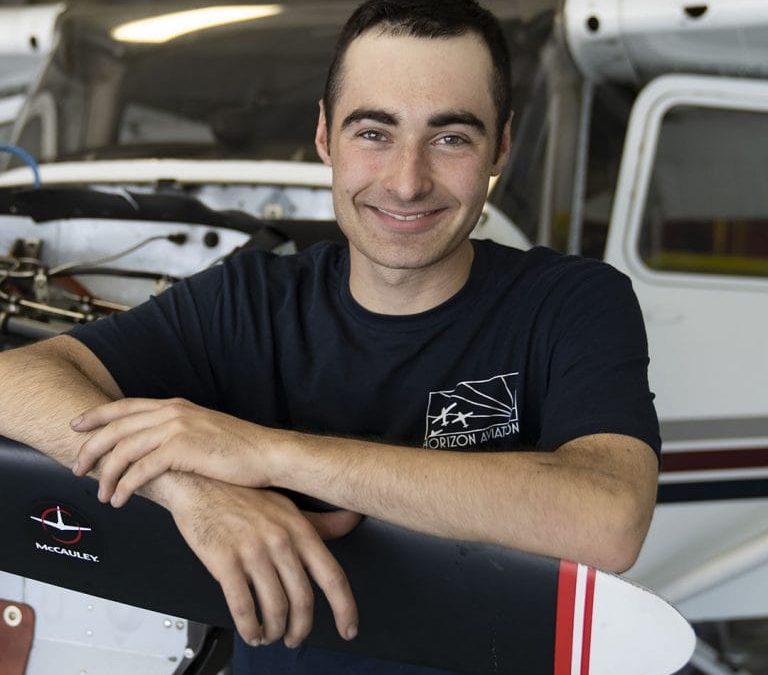 Julian Natale has joined the maintenance team at Horizon Aviation as a mechanics apprentice. Already a licensed pilot, Julian is working simultaneously on obtaining his A&P and commercial pilot certificates. Aviation has been a part of Julian’s life since he was a young child. His father was a career aviator, flying the Boeing 727 for DHL and later the Britten-Norman Islander for New England Airlines. He was able to fly with his father in Islander on occasions when the airplane would need to be repositioned with no passengers on board. While he was never pushed towards aviation by his family, he was given the opportunity to discover it, explore it, and fall in love with it if he chose to. Unfortunately, Julian’s father passed away in 2010, and never got to see his son become a licensed pilot. It was a few years later when Julian was still a teenager that he began learning the art of flying at Horizon. He was able to solo when he was just 16, and received his private pilot certificate at only 17 years old. A short time later he purchased his first airplane: a 1947 Beechcraft Bonanza B35 with which to build flight hours and earn his advanced ratings. His collegiate career sent him to Bridgewater State University where he studied aviation management. Splitting his time between studying and working at Boston Logan International Airport, Julian graduated with a fantastic combination of knowledge and real world experience. His outlook has never been to work in aviation, but rather to live his life fully enveloped in the world of airplanes and flying. His has “big airplane ambitions,” namely to captain a Boeing 777 for FedEx, though he will always remain rooted in the small airplanes that got him started. Wherever flying takes him, Julian knows that his father would be proud to see him reaching his goals, and living the dream that they both enjoyed.